The orchids flower is very different from other blooming plants. They can come in many different shapes, sizes and some may contain pleasant fragrances.  Even though some may look completely unique they will still have all the same parts. Orchids are monocots meaning all the parts come occur in 3.

FUN FACT: Pollinators play a major role with orchids because they can influence the appearance. 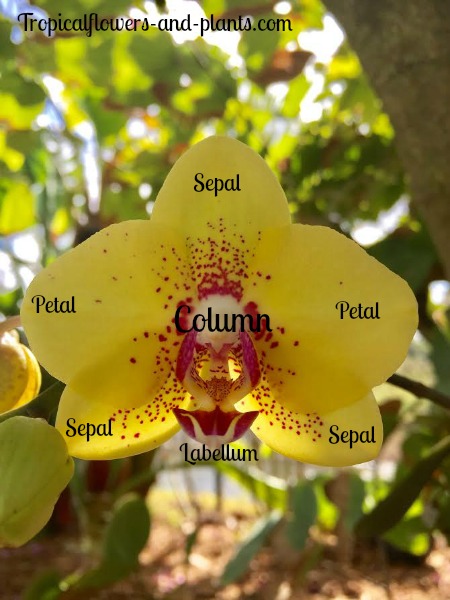 Parts of the Orchids Flower

The sepals are found on the outer part of the tropical flower. The flower contains three sepals that surround the petals in an equilateral triangle. The sepals are the least recognized and in some orchids they may be unnecessary to the orchid. Most of the time the sepals will match the petals color.

When looking at a Phalaenopsis orchid you can see the sepals very easily. However, slipper orchids may be a little more challenging due to the lower two sepals are fused together making it appear as one.

The labellum also known as the lip is formed by the third petal that’s located on the lowest part of the flower. This part of the tropical flower may be displayed one of two ways:

1) The labellum may be smaller than and not as detectable as any other part.

2) In some orchids the lip is large and dramatic with ruffles and frills. An example of this look would be the Cattleya.

Think of the labellum as the entrance for visitors or pollinators.

This is one of the most important parts of the orchids flower. The column is located right above the labellum and contains all the reproductive parts of the tropical flower. Hidden in the column is pollen. Th pollen is bunched in a waxy bulk known as pollinia.

Pollinia is at the beginning of the column on the anthers (Anthers= male flower parts).The female reproductive part is called the stigma and it’s located behind the anther. The placement of each part in the column is so that the orchid doesn’t self-pollinate but rather invite the pollinator inside. Once the pollinator is inside the pollinia will rub off on the insect which will then leave some of that pollinia in another tropical flower.

Leave me any questions and comments in the box below.

Looking for a new book to read? Check out some of my recommendations